ARCHITECTURAL VISUALIZATION IN BLENDER for the week of October 29, 2018

How good is Blender as an arch viz tool? You might find the answers in the arts and comments made by the following artist(s), some of the many that are scheduled to be featured
in this series.
Kindergarten
by Nexus Studio
Renderer: Cycles 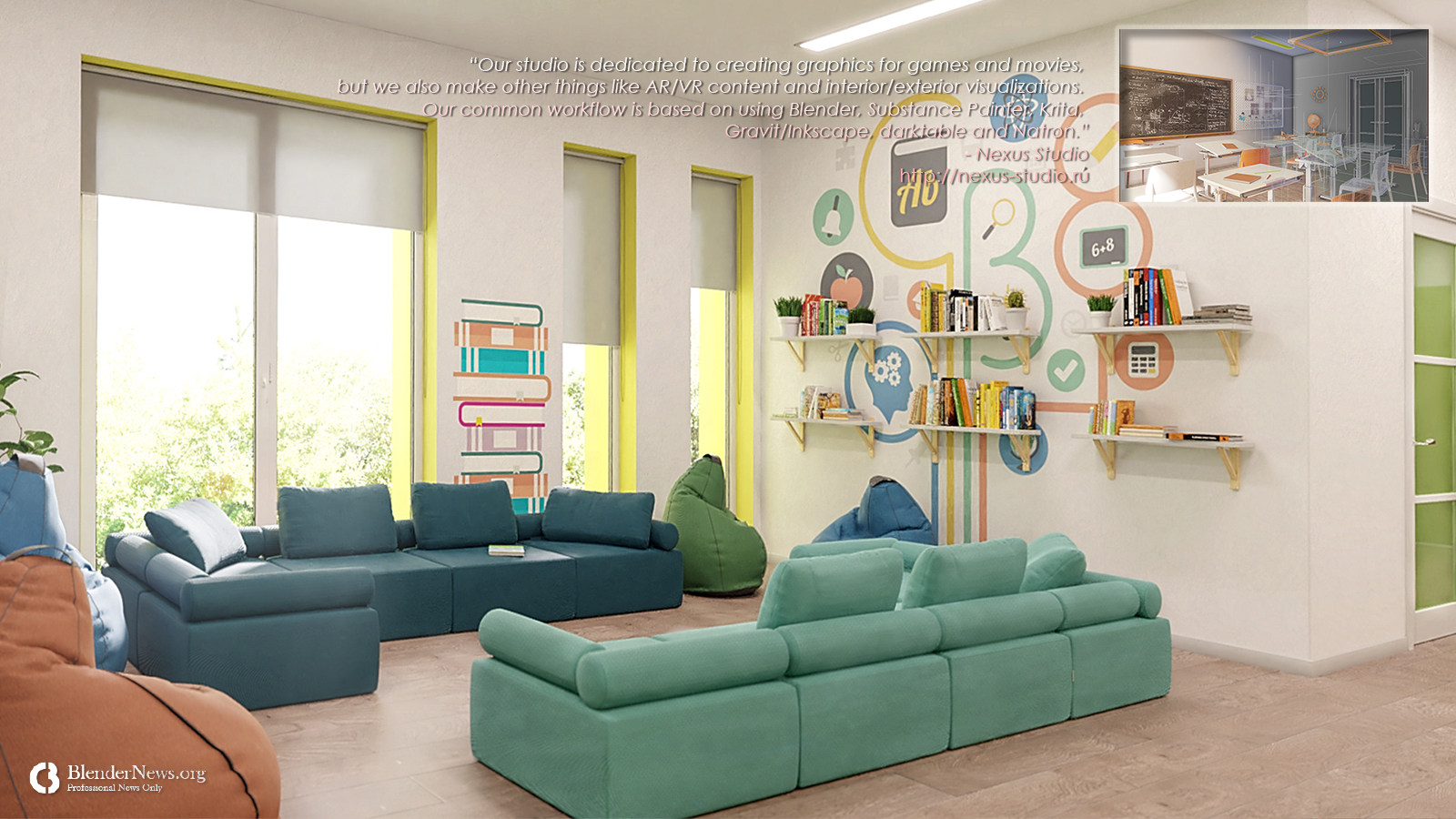 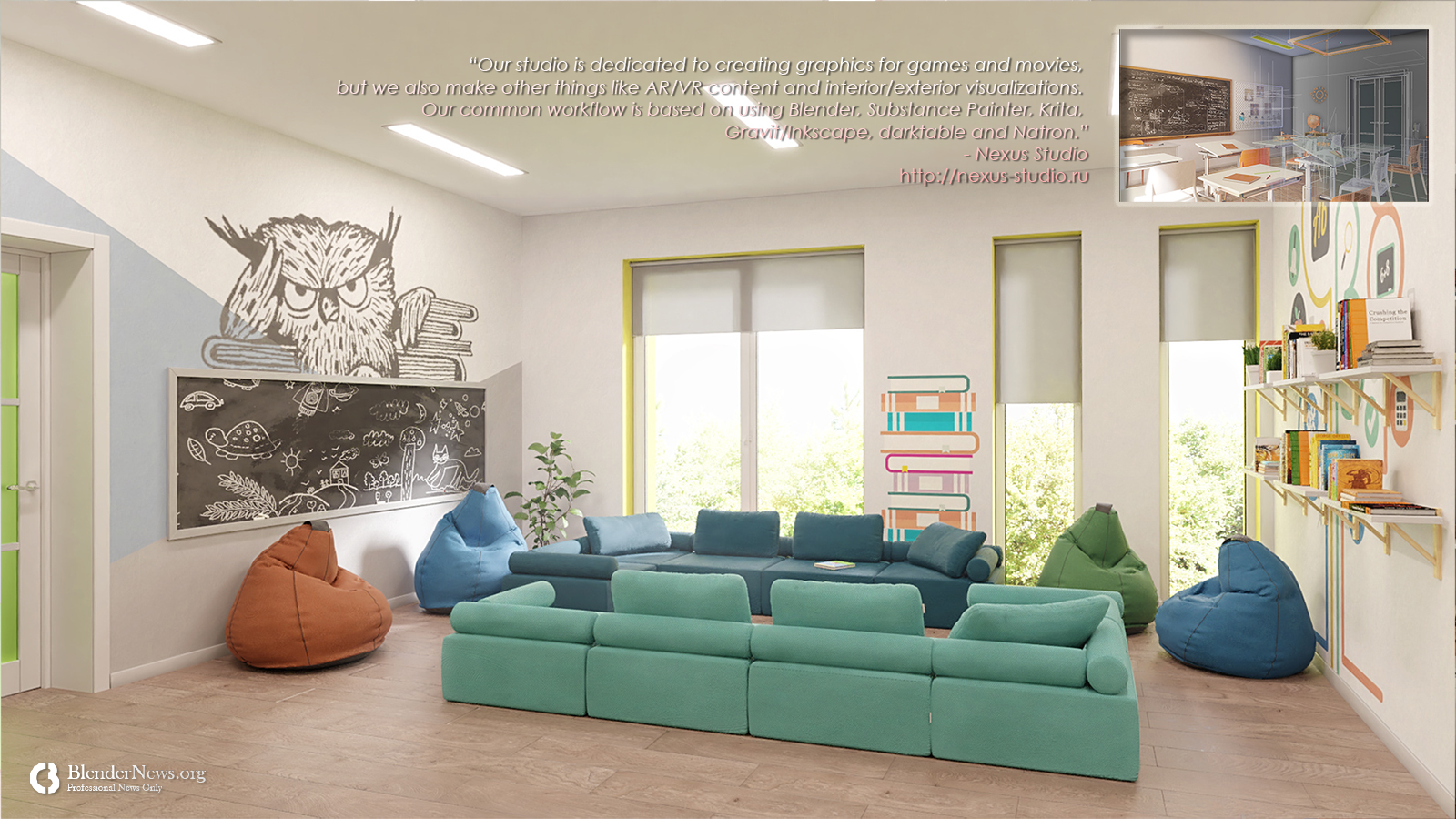 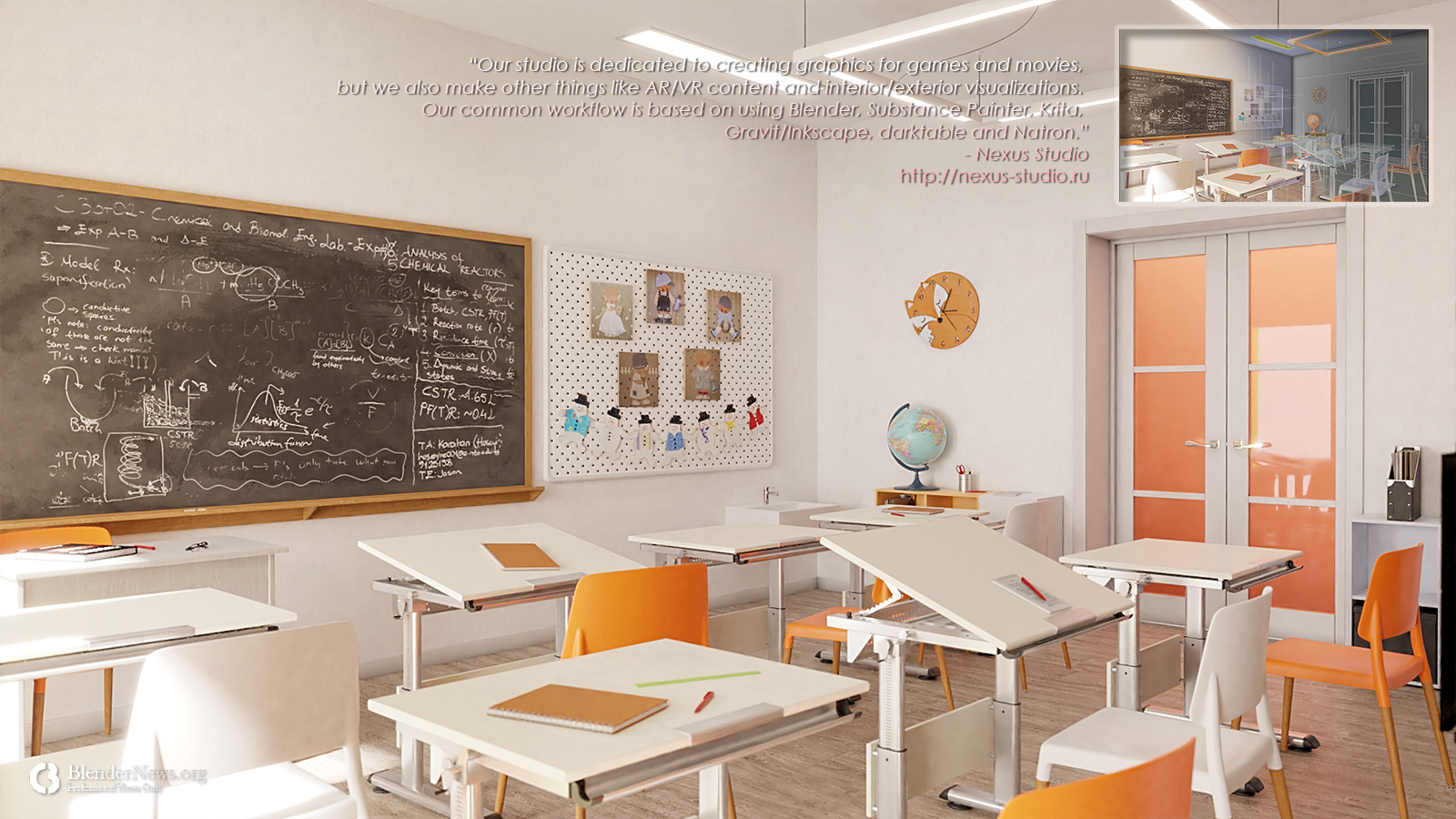 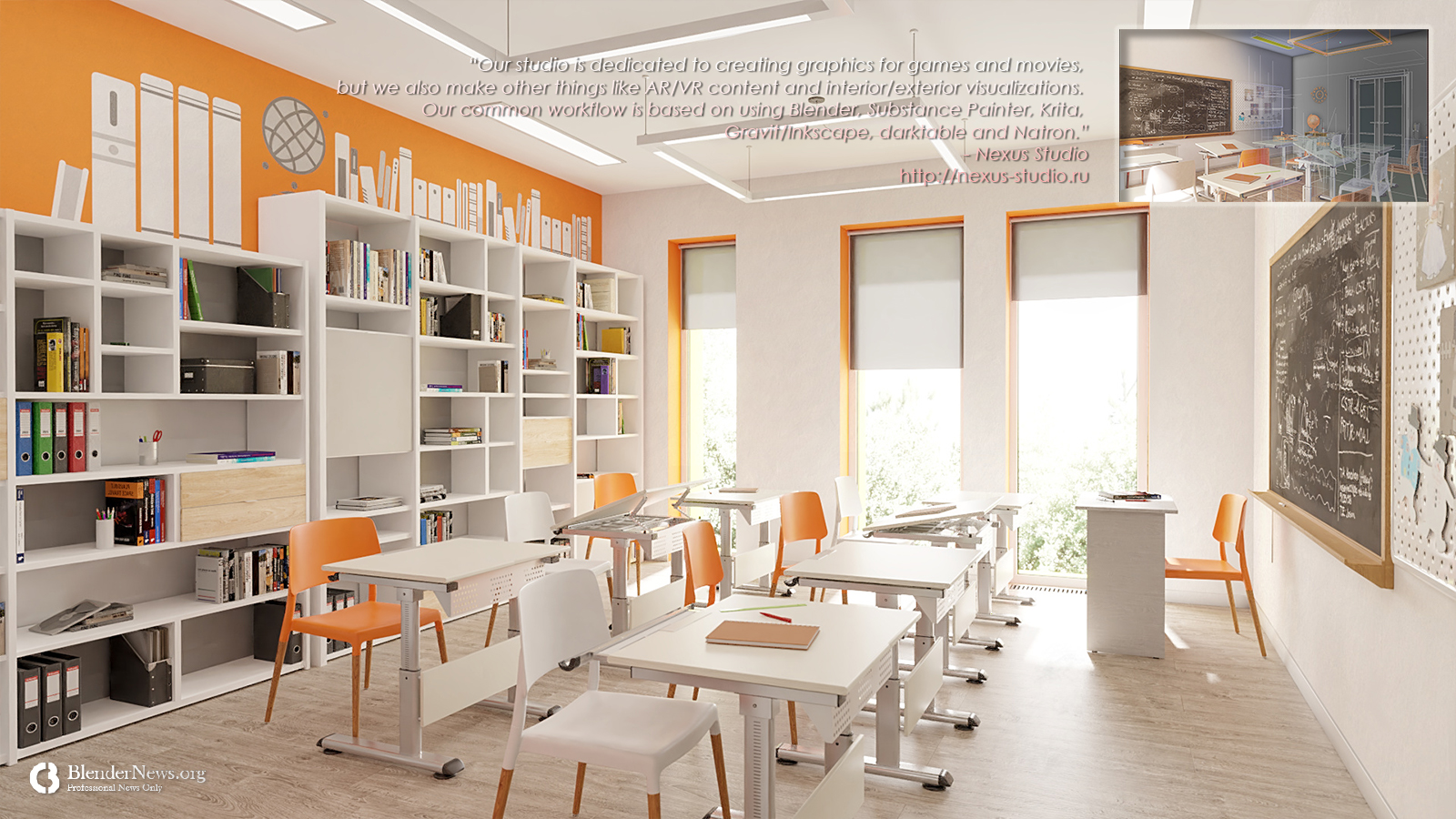 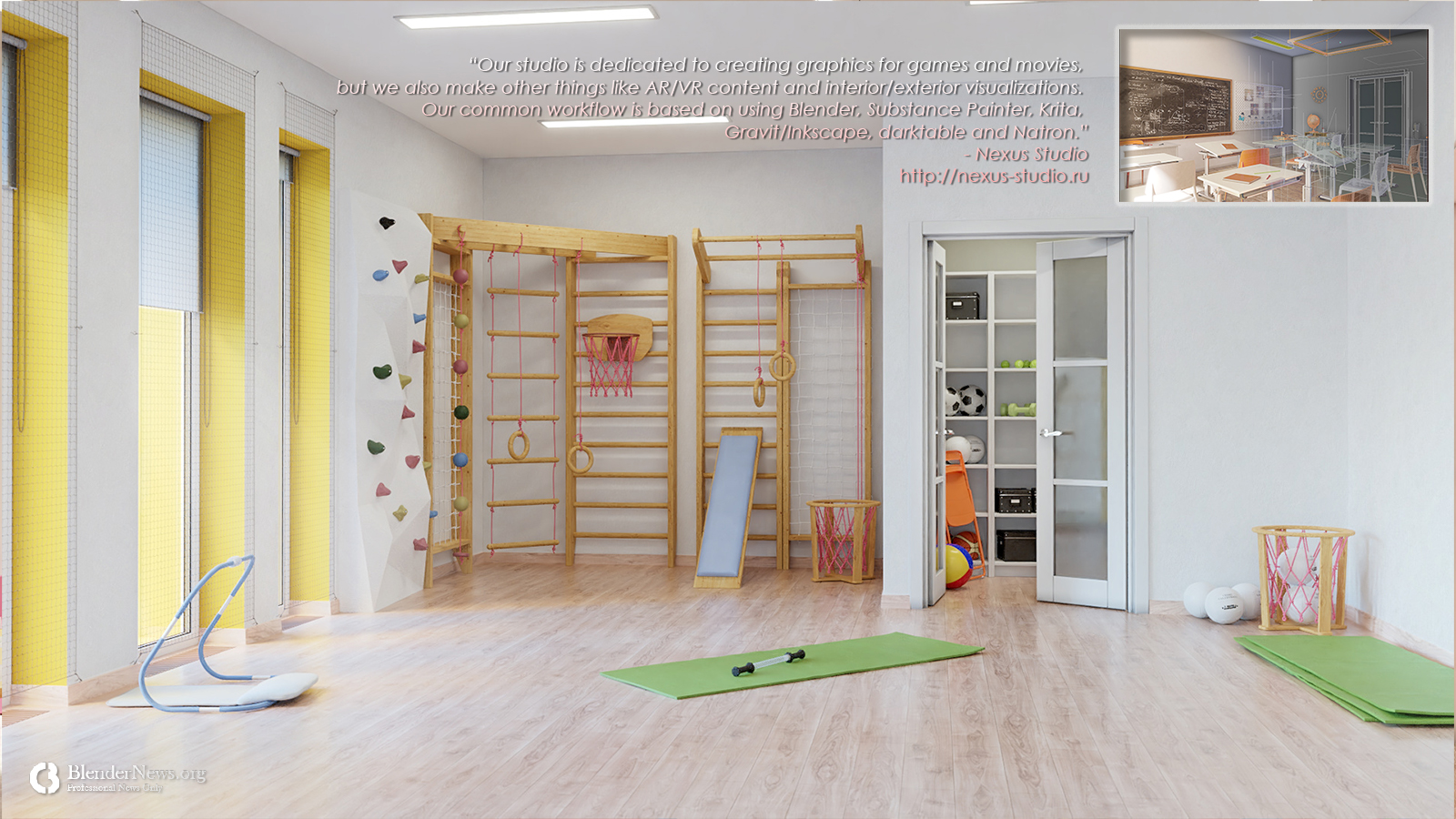 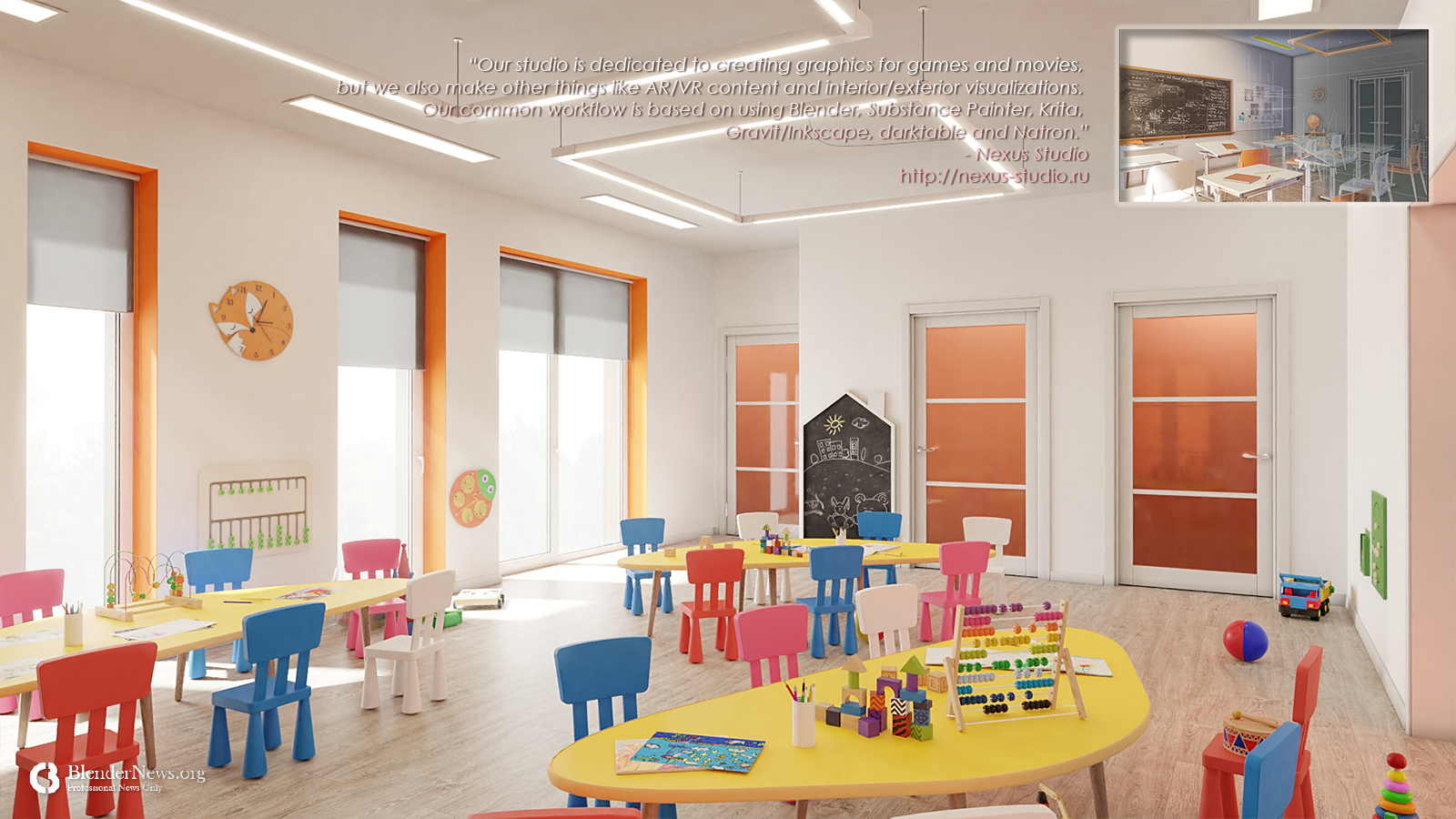 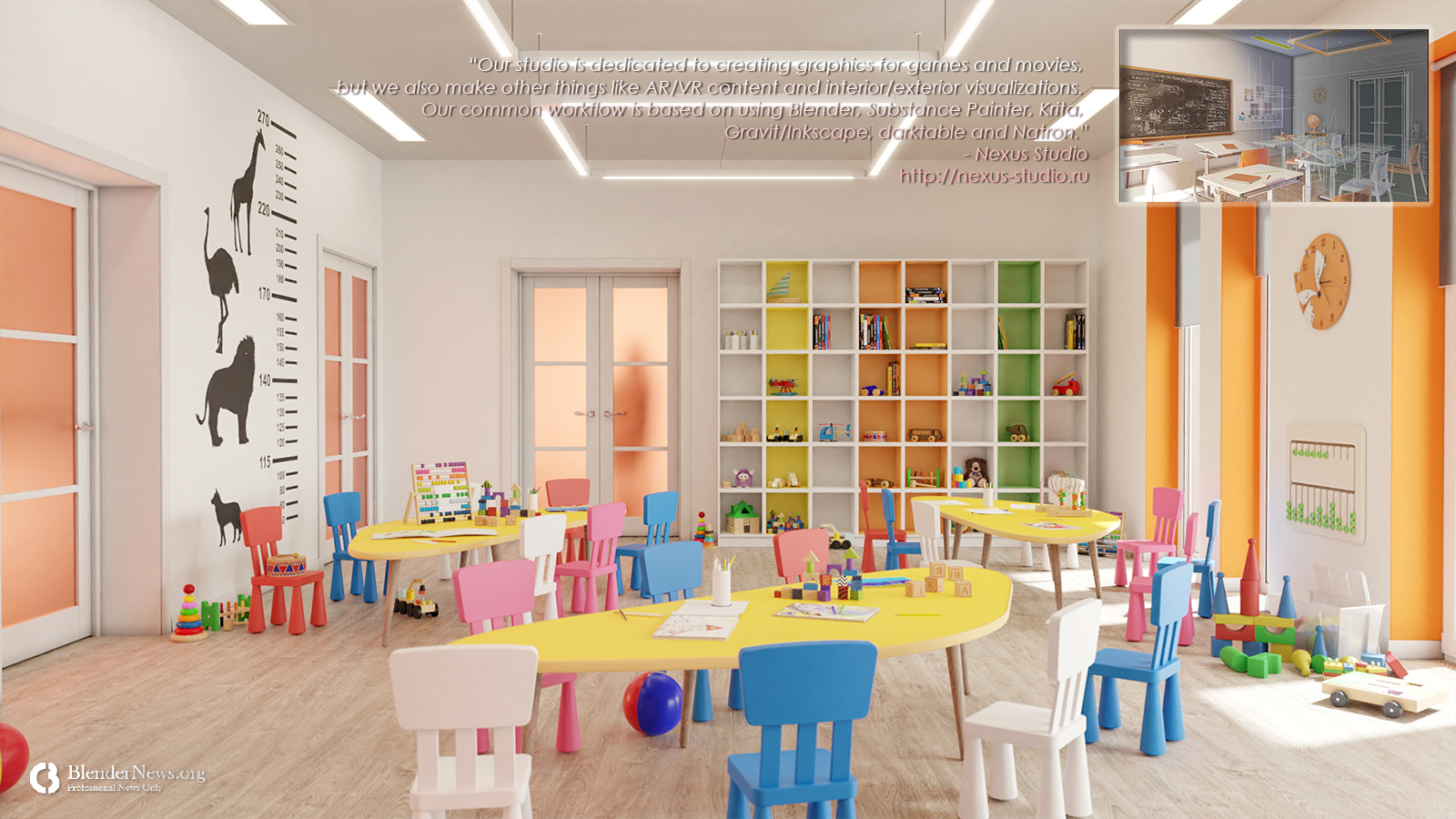 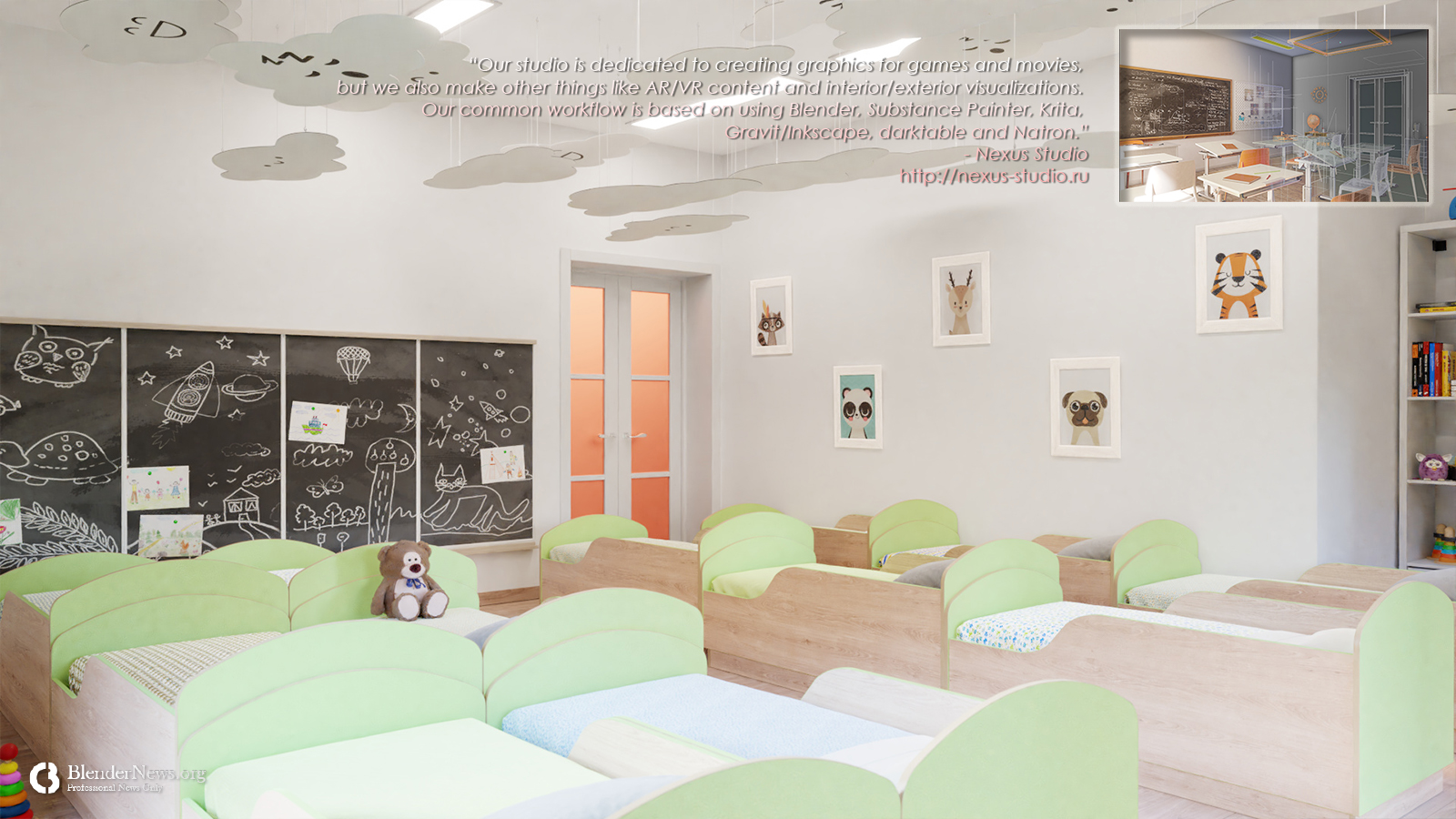 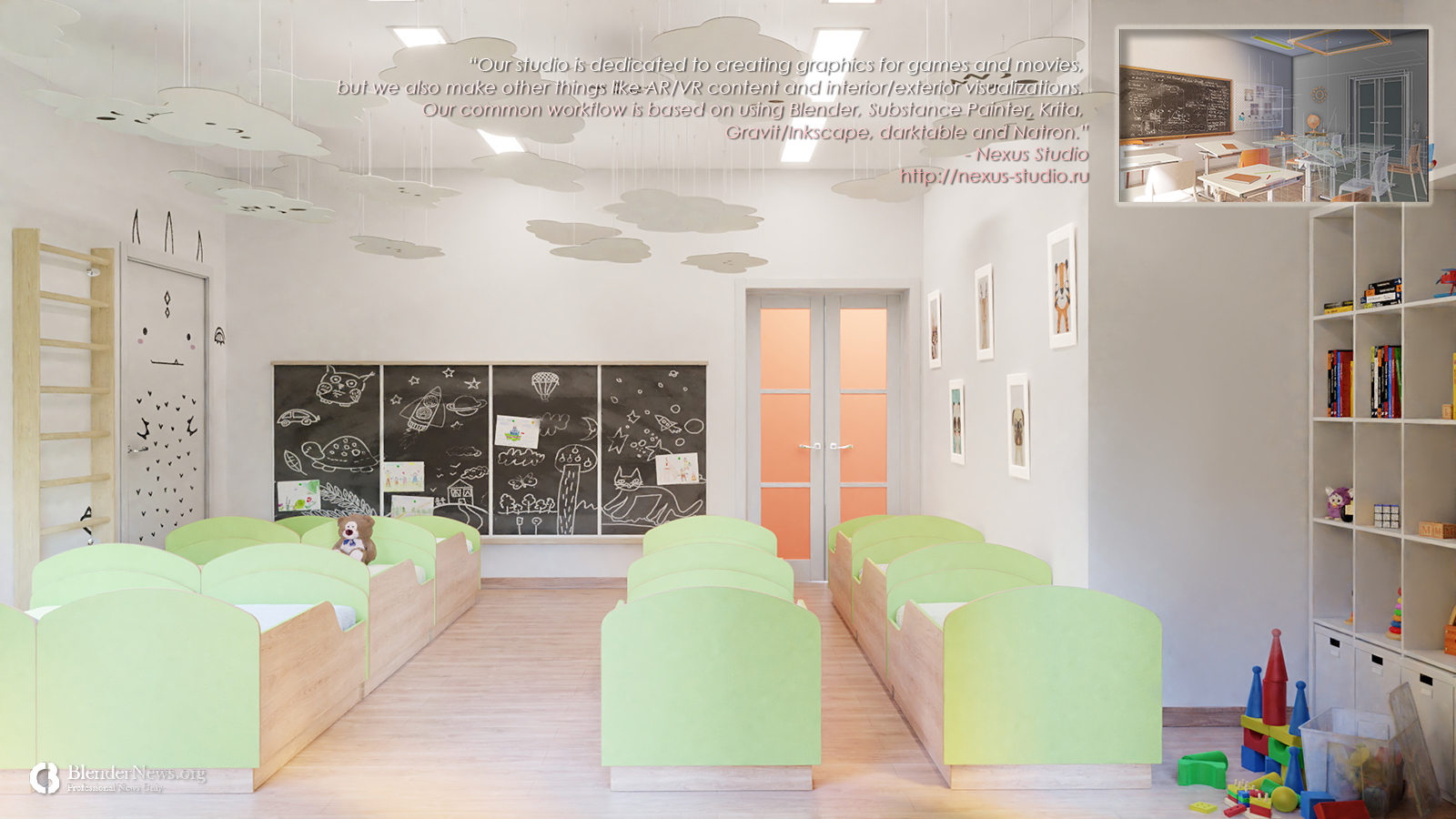 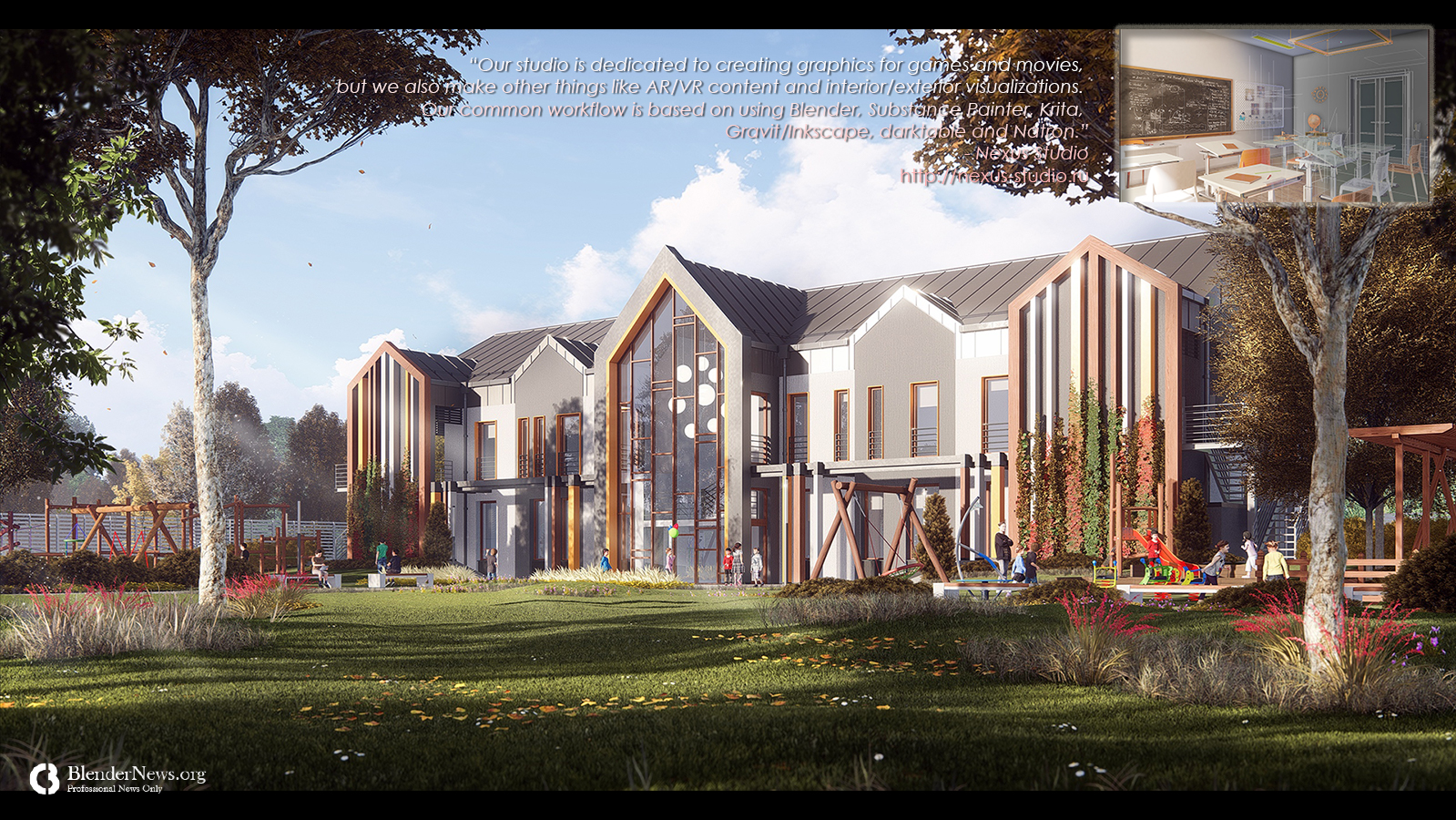 Artist's Comment
About Us:
My name is Stepan, 26 years old. I am the head of Nexus Studio, 3D graphics company based in Belgorod, Russia. Our studio is dedicated to creating graphics for games and movies, but we also make other things like AR/VR content and interior/exterior visualizations. Our common workflow is based on using Blender, Substance Painter, Krita, Gravit/Inkscape, Darktable and Natron. We began using Blender since version 2.68, after having previously worked in 3ds Max and Maya for six years.
About "Kindergarten:"
This particular visualization was prepared by our team for a governmental project of renovation of existing kindergarten in Belgorodskaya Oblast with the purpose of creating a kindergarten combined with primary school. Within this project, Nexus Studio worked as a subcontractor for regional project engineering company Belgorodoblproyekt. The design was performed by our architect Artyom Shashkin in cooperation with Anna Borzasekova, who collaborate with our studio on a constant basis.
As it was mentioned, the building itself is kindergarten where kids go to every day, so we had to make it as attractive as possible. In the same time, we were limited by existing budget for following construction works. The crucial part was finding suitable materials both attractive and considerably inexpensive.
Balanced color patterns and realistic lighting were the key instruments for succeeding this goal. We managed to avoid oversaturated (or let's say, "toxic") colors, so the interiors mostly look smooth enough and don't irritate you.
Talking about color management, Filmic (that is implemented into Blender by default) helped us reach a more realistic look due to its well-made tuning setups and options.
In order to make each room feel habitable enough, we considered adding a lot of small elements and details such as books, toys, different kinds of decoration etc. Whenever we had some bigger objects in the scene, more attention was paid towards detailing it.
Working as a team gives you more options in terms of segmenting the tasks. While some team members were modeling new assets, others were adding them to the scenes. During the process, one would need to quickly add a relatively big number of small objects, and simple linking wouldn't be comfortable enough, so we used our own addon using which we were adding models from previous projects.
Compositing was not the cornerstone of this project but rather a small addition to improve the final look and bring more expression to the renders, using blur or sharpness masks and other minor tweaks.
CPU+GPU rendering feature in the experimental version of Blender allowed us to spend less time rendering the scenes.
When working with this kind of projects, you are limited by strict deadline, so we had to put our best in shortest time possible. Its was quite a challenge but we succeeded it.
Related Links:
1. https://blenderartists.org/t/kindergarten/1129568
2. http://nexus-studio.ru/
Contact info.:
http://nexus-studio.ru/
I want to